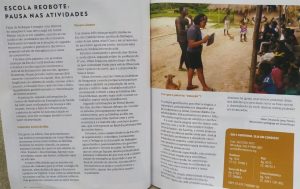 These days we got a mail from Helen Simone de Jesus Perera, missioner in Guinea Bissau. She sent a copy of the newspaper that had an article about the school Rebote. As it is in portuguese, I write here the translation of the text:

Speaking about Bubaque is always a mixture of emotions! The schoolyear in Guinea-Bissau begins always in Oktober, the end is in June, the modules are trimestre. We began to evaluate during the 2nd semester, when the president decreted the first time of emergency because of the coronavirus.

We gave an information about the illness to our pupils in the christian Rebote school and on the following day we got the order to shut the school, and church, and were informed about the closing of the borders. In this periode we had only two cases of corona in the capital. But because of the fragility of the health-system, inspite of the order, the situation became more critical, and gradually the contamination increased.

At the moment, as told from the center of operations of emergency of health, there are 1339 desease cases confirmed and 8 dead. As there is the leck of infrastructure, the health-system is near colaps, and without possibility to serve the majority of the population.

Social context of the island:
In general, in Africa, but mainly in the villages and communities of Guinea Bissau, people live very close together; families sleep in the same room, in the same foam (double mattress) or have mats on the floor.

They spend the whole day doing their activities, whether in the gardens, picking cashews or at home.

The greatest difficulty that can be perceived in terms of care to avoid contagion of diseases, in addition to the lack of water and little hygiene care,  they all eat in the same bowl, sometimes use spoons, but usually eat with their hands.
And how about our 308 children enrolled at Escola Cristä Reobote, on the island of Bubaque, how are they in this crisis? With the end of the school year now in June, we will have a loss of 50 school days. We are beginning the rainy season and, at this time, according to the third year teacher. Pinto Joaquim, a native of the island,  parents often travel to other islands to plant rice, which is the basic food here.In this context, many children no longer attend school because they accompany their parents and help with land preparation, planting and cultivation. Here child labor is considered common and for families there are no problems, the sooner they start work, the higher the family’s income. they give in marriage to better deal with the economic crisis and most do not finish the fourth year, which corresponds to the end of the first phase of basic education.

We, as the school’s management team, are already organizing the timetable, together with the Bubaque education police station, awaiting the government’s position to adjust the return to school, so that children are less harmed. We are confident that this will be the last state of the rainy season, in September, we will resume classes and conclude the school year, despite the losses in terms of quality. Why the word “emotion”? It is always gratifying to realize the joy, the hope, especially of those who have already known Jesus, even in the face of adversity. There is a grateful and happy people here, with much hope for a better future.
And it is with great joy that we started a partnership with ACD (Christian Association directed) from Austria, and new projects are about to happen this year, but we immediately received the donation of sewing machines, where we will start a possible cooperative for the mothers of the children of our school. So, in addition to training, they will be able to make clothes for their children, accessories for sale, have a financial return and even school uniforms, but this is news for our next edition. Be in prayer for our children, for families, for work on the island of Bubaque. Now there are 308 children in school, dozens in the church, but we have hundreds of them in the villages who need to hear the good news and, depending on you, many more can be reached.

Missionary and teacher in Guinea Bissau

Unfortunately, the outpatient clinic in the school’s annex is currently not in operation, as no nurse has agreed to work under the given circumstances. It is hoped that ways and means of dealing with the pandemic corona with new medicines or a vaccination will be dealt with. Unfortunately, that is still in the stars, the population must accept their suffering and hope for the help of those who, in the love of our Lord Jesus Christ, help those who are in need.