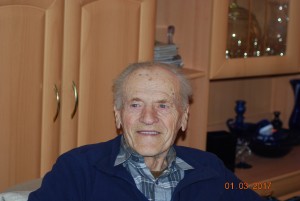 BIRTHDAY  of our member   ALOIS URL.

Alois invites for his Birthday-party on 7th of Mai 2017. He will celebrate his  90th  birthday.

Instead of bringing gifts to him, he begs the visitors to donate money for the project that ACD patronises in Brazil. AUPNE, as the association in Brazil is called, is building rooms for teaching blind and disables persons.

The feast will take place at the banqueting hall of the Christian Church in St.Stefan/Rosental.

He had a very tumultuous life because of the 2nd world war, but let us see, what he can tell us:

I was born on 7th of Mai 1927 in Krottenberg, near St. Stefen /Rosental, Austria. My parents, Konstanzia and Andreas, had a small farm with cattle and some fields to plant crops.

I had a very happy childhood and grew up with 2 brothers. Soon we began to help our parents  working on the farm.

I attended school till 14, afterwards I dedicated myself to the farmerswork.

At the beginning of 2nd world-war , 1939 I had to attend military service in Berlin in defense of American and English air attacks.

As the Americans occupied Germany, many of our  wartime comrades became prisoners of war. We were brought to a place where we had neither sufficient food nor shelter. We made holes to hide ourselves. Unfortunately most of the guys did not survive this cruel treatment. But some day I and other survivors were brought to other places. I came to a farm in the south of France, together with a comrade I knew from my home village. To our big surprise, the farmer was nice to us and we had a comfortable time working hard to please the kindly man.

Finally the day of our release came and we were brought to a camp in Tirol. Many people were there wating for an opportunity to go back home. After 10 days a train came and we could go to Studenzen. From there a man with horse and carriage brought us to Krottendorf.

Nobody can imagine the enjoyment hugging my parents  and brothers again, after such a long time.

At home I spent most of my life working at our farm. Some years I earned money  working in a shoe-factory.

Years passed, I had to mourn the dead of my beloved parents, brothers and some friends. Now I am living alone at the farm.

Now, going to celebrate my 90th birthday, I can call myself  a privileged man. I have some good friends, especially Clergy Irani Marbler, who helpes me with the household, cookes for me and gives spiritual assistance. Her husband Franz is a very dear friend too. I also like to meet my relatives Josef and Anni Url and my beloved cousin Grete.

You can watch the video at : https://youtu.be/7OUmzzl42QI