Topic: Even when we die we will get a new life.

11 And it came to pass [a]soon afterwards, that he went to a city called Nain; and his disciples went with him, and a great multitude. 12 Now when he drew near to the gate of the city, behold, there was carried out one that was dead, the only son of his mother, and she was a widow: and much people of the city was with her. 13 And when the Lord saw her, he had compassion on her, and said unto her, Weep not. 14 And he came nigh and touched the bier: and the bearers stood still. And he said, Young man, I say unto thee, Arise. 15 And he that was dead sat up, and began to speak. And he gave him to his mother. 16 And fear took hold on all: and they glorified God, saying, A great prophet is arisen among us: and, God hath visited his people. 17 And this report went forth concerning him in the whole of Judaea, and all the region round about.

God is faithful, he helps You when You need him, He knows Your difficulties and acts at the right time.

What are You ? Are You an unstructured crowd or His disciple ? Change Your life and God will begin to show You His will. The real disciple has difficulties but at every time he thanks God and shows Him his adoration. The disciple wants to give the best of him to his Lord. The disciple does not see but he believes.

The woman in the parabola had lost the most important in her life – her son. Nobody gave any credit to her, she was disdained, nobody wanted to speake to her. A woman without husband and son is nobody. God saw her suffering and helped her. He called her son forth, and during a short time eberybody in the surrounding area spoke about this miracle and praised the Lord.

God is our help, God is our life, everything for us. 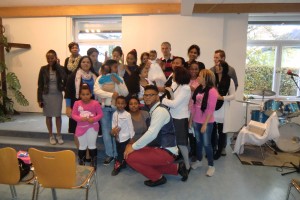